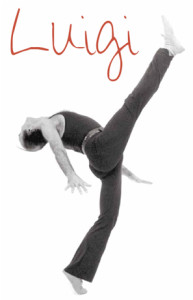 Last week I felt like my worlds came together in a surprising way.

In my former life, I was a ballet dancer. So my ears perked up in the Polarity bodywork class I was taking, when my teacher, Gary Strauss, mentioned the world-famous dancer and choreographer Luigi.

I grew up taking Luigi-style jazz classes but never knew his back story. It’s pretty remarkable.

Two months after arriving in Hollywood to pursue his dream, Luigi was in a near fatal car accident. He was paralyzed on one side of his body and doctors told him he’d never walk again.

While in a coma, he reported hearing an inner voice tell him: “Never stop moving kid, if you stop you’re dead.”

So the first thing Luigi shows us is to listen to our inner voice. Hypnosis can be explained in many different ways, but I think the ability to listen to your inner voice is the #1 best thing about hypnosis and where transformation starts.

Back to Luigi. Dance he did: performing in An American in Paris, Singing in the Rain, and 28 other movies, eventually opening up his own school. At age 88, he still teaches daily classes.

But what was the one thing Luigi said that explains why making positive change is often hard?

And how can this new understanding help you transform your life in a powerful way?

How does this apply to making changes in your own life?

So often we do things over and over–so much so that it feels right even if it’s wrong (e.g. think bad habits, addictions, negative thought patterns).

And when we make a change using hypnosis, it sometimes feels wrong, even if it’s right.

I’ve experienced this first hand in my own life many times, and I love hearing clients share similar experiences. After going for a few hypnosis sessions, I’ll start to do whatever negative habit or behavior I always used to do–and DON’T! It’s quite an interesting sensation.

The most dramatic example was my fear of public speaking. I got up to do a presentation, and instead of rushing through it, I took a deep breath, surveyed the room, took it all in and savored the moment. I felt like I was in the wrong body at first. I actually enjoyed giving the speech (and believe me, I used to feel like throwing up, so this was quite a dramatic change).

And one last famous Luigi saying:
“Put the good side into the bad side.’’

All the self-hypnosis techniques I show you are ways to put the good into the bad, allowing you to get better results, so you can transform.

What are ways you can do the right thing even if it doesn’t feel comfortable, or put the good into the bad? I’d love to hear your ideas!