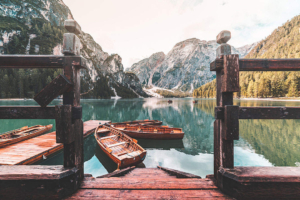 Dusk on the River

I’ve seen a lot of clients recently wanting to find more positive ways to deal with their anger.

In the system of Reiki healing there are 5 Reiki precepts, or rules to live by. The first one is: “Do not bear anger, for anger is illusion.”

This precept reminds me of the Zen story told by Pema Chödrön, “Dusk on the River,” and offers an interesting perspective on anger.

A man is enjoying himself on a river at dusk.

He’s in a small boat. And suddenly he sees another boat coming down the river towards him.

It seems so nice that someone else is enjoying the river on a nice summer evening.

Then he suddenly realizes the boat is coming towards him faster and faster.

He begins to get angry and upset and shouts, “Hey, hey! Watch out! For heaven’s sake, turn aside. Don’t hit me!”

But the boat just comes faster and faster, right towards him. By this time he is standing in the boat, screaming and shaking his fists. MORE…

I recently read an account by neuropsychologist and Buddhist teacher, Rick Hanson, about a powerful bodywork session he had years ago. He talked about how the session focused on his abdominal area and what he was expecting:

“I was anticipating (= dreading) the release of buried sadness. Instead, there was a dam burst of love, which poured out of me during the session and afterward. I realized it was love, not sadness, that I had bottled up in childhood – and what I now needed to give and express.”

I have found the paradox, that if you love until it hurts, there can be no more hurt, only more love. — Mother Teresa

Clients often ask me what to expect during their session. So many of us expect to get in touch with buried pain or sadness, but the idea that inside us rests this bottled up, unexpressed well of love can be a liberating thought.MORE…

Do Not Bear Anger

The system of Reiki offers 5 precepts (or rules to live by). The first one is “do not bear anger,” and I’ve recently been exploring this precept in depth.

I think the definition of “bear” is interesting–“to carry in the mind or heart.” The precept isn’t saying don’t get angry, but rather don’t hold on to it or suppress it. Instead of keeping it, feel it and then let it go. Otherwise, you carry it and research suggests anger can contribute to many illnesses (see below).

What is hypnosis? There are many misconceptions based on movies, swinging watches, and stage hypnotists. Read on to find out how you’re much more familiar with hypnosis than you might think….

Self-Hypnosis: You Do It All The Time

A lot of people think of hypnosis, or trance, (they can be used interchangeably) as a strange altered state, when in fact it’s a common everyday thing. We’re all familiar with times when we’ve just drifted off, losing sense of time. Jogging, reading, driving, watching TV, listening to music, commuting on the subway–these are all trance states and are times when the unconscious takes control.

We can’t solve problems by using the same kind of thinking we used when we created them.–Einstein